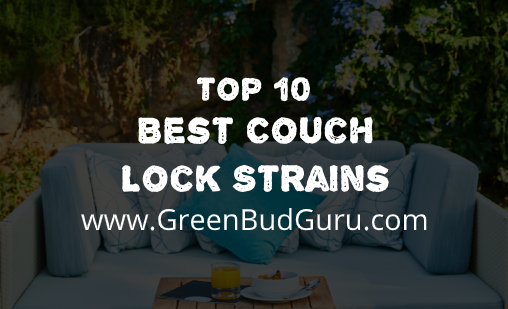 Both Indicas and hybrids and known to produce this effect, however, some strains are definitely more well-known than others for their couch-locking abilities.

In this article, we’ll take a look at the 10 best couch lock strains for heavy relaxation!

*Please note that the yields listed above are maximums based on an ideal indoor grow environment. These numbers are likely to change based on factors such as growing experience, light quality, training techniques used and harvesting time.

Keep reading to find out about more information about each strains THC content, effects, flowering time, grow difficulty and much more.

Buying Seeds Online? Don’t get scammed! Check out my in-depth guide on the best seed banks to order from that are 100% safe and reliable.

Named after a covert CIA operation, MK Ultra truly earns the name due to infamously potent and fast-acting effects. MK Ultra’s couch lock is described as almost ‘trance-like’, but unlike the CIA this strain is more like a warm blanket than undergoing hypnosis!

The Sativa balance gently uplifts the mind, making this the perfect choice for relaxing on the couch when it isn’t quite bedtime yet. Not only does MK Ultra provide an award-winning couch lock high, but its Sativa balance adds a mental relaxation factor for a holistic experience.

With a balanced high and legendary couch-lock effects, few strains will make you sink lower in the cushions than MK Ultra! This strain deserves its place at the top of our best couch lock strains list.

You can purchase MK Ultra seeds from Ilovegrowingmarijuana.com

As the name suggests, Hash Plant is an Indica-dominant strain that provides a full-body stoned high similar to smoking hashish. It can contain up to 20% THC, with buds so sticky and dense that they almost feel like a block of hash resin!

With a couch-locking high that seems to seep into your entire body, Hash Plant is a favorite for days that don’t involve to-do lists or appointments. It’s also a powerful stress and pain reliever, further cementing its place on our list as one of the top couch locking strains!

You can purchase Hash Plant seeds from Seedsman.com

Next up on our ‘best couch lock strains’ list is OG Kush. With powerful calming effects that aren’t lacking in euphoria, OG Kush is an Indica-heavy hybrid that enjoys a near-constant demand.

A favorite of recreational and medicinal patients alike, OG Kush delivers a mixture of happiness and relaxation that entices – rather than forces – you to stay put on the couch. Not to be underestimated, even seasoned smokers will be impressed by a THC level of 19%!

This hybrid is quickly becoming a Hall-of-Fame strain, and regular users will know why. The flavor is distinctive but extremely pleasant, and the smile-inducing Sativa genetics round the strain off very nicely. If you haven’t already it’s definitely time to experience the euphoric, couch-locking power of OG Kush.

You can purchase OG Kush seeds from Seedsman.com

This is a strain that definitely deserves a place on our best couch lock strains list. If you don’t want to get up from your couch any time soon, there are few strains that can make that happen more effectively than Crystal.

Revered for relaxing and stress-relieving effects, Crystal’s high THC levels can be overwhelming for new users so use caution at first. That said, the cerebral and mind-boosting Sativa effects of this strain make it a favorite for day-time relaxation, as it won’t send you to sleep.

You can purchase Crystal seeds from Ilovegrowingmarijuana.com

The Indica dominance is really noticeable with White Rhino, and many people include this strain in their regulation rotation to wind down and relax. Although some report that the couch-lock feeling often gives way to tiredness, that’s not necessarily a bad thing!

White Rhino is the perfect couch-lock strain for winding down at the end of the day..

You can purchase White Rhino seeds from Ilovegrowingmarijuana.com

A strain with three separate genetic lineages, White Strawberries comes in two different phenos each with different effects. The Indica-dominant variety is famous for its couch-locking effects and comes with a ‘floating on the cushions’ feeling that put it on many peoples’ favorites list.

The delicious strawberry flavor and high THC content (20%) have put White Strawberries into regular rotation at many dispensaries. It’s important to check which pheno you have though, as the Sativa-dominant variety is known to be quite motivating and energetic.

You can purchase White Strawberries seeds from Seedsman.com

With roots that can be traced to traditional hash production in the Middle East, Afghan is a resin-heavy strain that exemplifies the effects of Indica over Sativa. A smooth building high, it soon builds into a powerful wave of relaxation that will bust even the most stubborn anxiety and stress.

Smokers of Afghan often find their minds drifting off, as the comfort of the Indica body high works its magic behind the scenes. It also has a higher-than-average CBD content, further compounding its relaxing effects.

You can purchase Afghan seeds from Ilovegrowingmarijuana.com

You can purchase Gorilla Glue #4 S1 seeds from Seedsman.com

This strain was literally born to be featured on this best couch lock strains list. Like a high-quality speaker pumping out bass, Rocklock pulses relaxing waves throughout the body and mind.

Rocklock delivers a stoning, all-body high that will keep you parked on the couch without lulling you to sleep too easily. If you’re tense, stressed, or just in need of a few waking hours completely zoned out then Rocklock is a great strain to try.

You can purchase Rocklock seeds from Seedsman.com

Interestingly, it is considered by many to be the true White Widow, as they were both bred by the same legendary breeder to achieve the same effects. Due to almost unparalleled potency, Black Widow will lock you to the couch from sheer force!

Please note that Black Widow may not be suitable for novice smokers, as there have been reports of it inducing anxiety due to its surprising potency. Consuming appropriate amounts, it provides intense mental euphoria that is quickly followed by a strong but relaxing couch-lock.

You can purchase Black Widow seeds from Ilovegrowingmarijuana.com