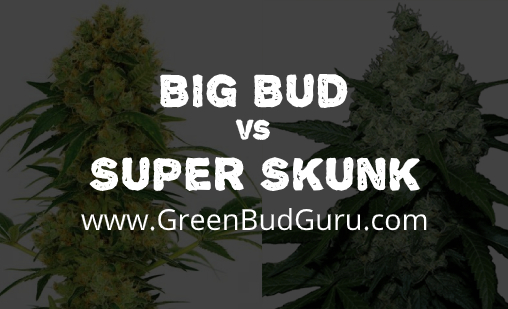 Big Bud vs Super Skunk: Both Big Bud and Super Skunk are Indica-leaning hybrids that are easy to grow and produce big yields. However, their effects are slightly different. Super Skunk gives a relaxing but active high, while Big Buds tends to knock its users out.

Read on to get to know them in more detail and see how they compare.

Looking to buy seeds? Check out my in-depth guide on the best seed banks to order from. My favorites are ILGM, Seedsman, and MSNL.

Big Bud is the ideal strain for anyone struggling with stress or insomnia because of the potent Indica high it provides.

Users rarely report mental stimulation. Instead the high is usually described as a heavy couch-lock stone.

The physical high it provides makes it ideal for treating conditions like fibromyalgia, chronic pain, and muscle spasms.

Just remember not to smoke this strain when you need to get work done, as the high is not incredibly productive.

Its calming effects are also useful during the day due to calm stress and anxiety without getting too sleepy, but instead giving you a spacey and euphoric high.

The THC level is high, between 19 to 22%, but what’s worth noting is that the CBD level is also high at 2.6% which provides an added benefit for more severe conditions such as seizures.

Also, this strain may help people undergoing chemotherapy-induced nausea or trouble eating, as it is known to boost appetite.

Big Bud is a strain that delivers on its name when it comes to yields.

Indoors it can produce massive yields of up to 800 grams per squared meter in the hands of a good grower, more common results are between 500 and 700 grams.

Outdoors it’s not unheard of Big Bud producing yields of up to 700 grams per plant.

Buds are also huge by all standards, dense, covered in trichomes, and very resinous.

Super Skunk’s harvest is not as bountiful as Big Bud’s, but the yields are nothing to frown upon either.

It produces up to 600 grams of bud per plant outdoors and around 550 grams per square meter indoors.

Super Skunk Buds are dark green, hard, and with short trichomes of brown and red color.

Big Bud can be grown indoors as well as outdoors.

Outdoors this plant needs to grow in consistently warm climates with lots of sunlight.

It can also be grown indoors, but early topping and pruning are recommended to keep height under control.

Flowering time is around 7 to 8 weeks indoors or early October if growing outdoors.

Also, because of the enormous flowers it produces, it’s recommended to use strings or wires to support the plant.

Super Skunk is moderately easy to grow and can adapt well to both indoor and outdoor conditions.

It has a short flowering time of around seven weeks indoors.

Outdoors it can be harvested in early October.

It’s important to note that one of the things Sensi Seeds looked for when breeding Super Skunk was to make it durable and tolerant to different growing conditions; hence the easy time most growers have cultivating it.

When it comes to Big Bud, the plants as well are massive, reaching heights of more than two meters outdoors.

Indoors it’s recommended to train and prune this plant to keep height under control.

Indoors it’s advisable to use early topping and pruning to keep it in the 70 to 150cm range.

Big Bud has a sweet and spicy taste with notes of grape and a fruity exhale.

It also has a very sweet hash-like smell to it, with some dank and earthy scents.

The smoke is also very smooth for an Indica, so users won’t be attacked by a coughing fit.

All in all, I think Big Bud makes for a delicious afternoon smoke.

Super Skunk’s name comes from its smelly resemblance to the furry creature.

Although others say, it smells like old cheese or wet earth.

The taste is described as a bit sweet and tart with earthy undertones, and the smoke is very clean and doesn’t irritate the throat much.

I have a particular fondness for Super Skunk and most skunk varieties as this was the most prevalent strain in my teen years.

The exact genetic makeup of Big Bud is not known, but it is believed to be an Indica dominant cross between Afghani, Haze, and Northern Lights.

It was developed in the United States in the 70s before being taken to The Netherlands to survive the war on drugs where it is bred to this day by Sensi Seeds.

Big Bud’s genetic background is very similar to another old school strain, Jack Herer, but Big Bud has more of a grape taste to it.

It was created by Sensi Seeds in their search to produce a perfect mix of Skunk and Afghani genetics, Super Skunk was their second, most successful attempt, three years earlier they had created Shiva Skunk.

The result is a 65% Indica / 35% Sativa hybrid of great taste and mind-blowing effects.

Still undecided on which strain to choose?? watch these awesome Big Bud and Super Skunk strain review videos by ILGM:

I hope you found this Big Bud vs Super Skunk guide helpful.

Anyone smoking or growing Big Bud or Super Skunk will be delighted with the results.

Both are Indica leaning hybrids; however, Super Skunk makes for a more active high instead of the heavy couch-lock of Big Bud.

On the other hand, people struggling with pain or insomnia might prefer Big Bud due to its strong body effects and ability to put users to sleep.