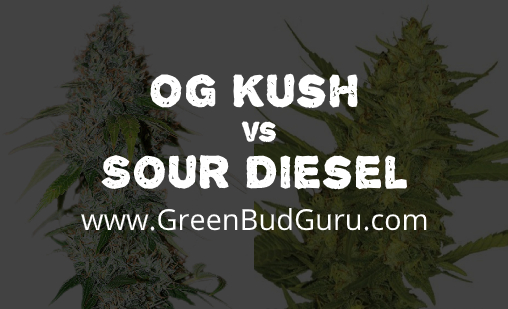 OG Kush is one of the original California-bred Indicas.

Sour Diesel has given rise to many popular strains such as NYC Diesel, Jack Fuel, Sour Tangie, and others.

Let’s read on and find out what made these strains so famous.

This “high” is also accompanied by an uplift in mood, making it a proper strain for fighting depression and anxiety.

The Indica heritage of OG Kush makes the “high” feel more relaxed and without the “mind race” that Sativas often cause.

Sour Diesel is not the ideal strain for occasional smokers because of its high THC level (20 to 25%).

The high starts with a quick and warm Sativa head rush that leads to a more profound Indica relaxation.

This “crash” may prove useful for sleep or anxiety.

The euphoria produced by Sour Diesel can also help reduce symptoms of stress or depression.

Make sure you cover both indoor and outdoor.

Outdoor yields with OG Kush tend to be between 500 to 550 grams per plant.

Buds are medium to large with a dense, Indica-like structure and a light green color.

Sour Diesel is one of the original cannabis cash crops.

It can produce harvests of 700 grams or more per plant outdoors.

Indoors, it produces a still high, but more reasonable harvest of around 500 to 550 grams per meter2.

Buds are light green, sticky, and semi-compact, as a good Sativa/Indica hybrid should be.

OG Kush does well indoors under artificial lighting and outdoors under the full sun.

In general, Kush crosses tend to be quite sturdy and can resist a variety of weather conditions.

One thing to keep in mind is to keep humidity levels in check to prevent bud rot or powdery mildew.

It’s a strain that both experienced and newbie growers will enjoy cultivating.

When growing indoors, pruning and bending will help growers make the most of their growing space.

It’s a strain that, though not very difficult to grow, is not for the complete newbie who might end up with a too big plant for their needs.

Indoors it can be trained to stay in the 90 to the 160-centimeter range.

Sour Diesel is a plant that can grow very tall outdoors due to its Sativa heritage.

Indoors this strain also tends to grow tall, but with careful bending and pruning, you can train it to stay within a confined space.

OG Kush has a taste that doesn’t go unnoticed, with strong notes of earth, pine, Diesel, spice, and citrus.

The smell is earthy and dank with heavy citrus and gasoline notes.

When smoked, the taste is hashy and spicy like a classic Indica, with a subtle chocolate aftertaste.

Sour Diesel has a taste with hints of citrus, pine, musk, and strong chemical smell of gasoline.

The smell doesn’t usually go unnoticed and can be described as quite pungent, like lemons infused in gasoline.

This strain is also known for its harsh, acrid smoke that can cause users to cough.

Origins of OG Kush trace back to California, where a grower got hold of a few cuttings of Chemdog and shared one with another grower who crossed it with a Thai Lemon and an Old World Paki Kush hybrid.

The name is the matter of some controversy, with some people claiming it stands for Original Gangsta and others saying it’s because of the strain being Ocean Grown in the California shore.

The exact origins of Sour Diesel are not known, although it’s believed to have descended from Chemdog 91 and Super Skunk.

Most breeders believe that it was a cross of Chemdawg and Northern Lights and possibly Skunk #1.

However, some breeders believe it developed as a distinct phenotype of a strain named Diesel or as a phenotype of Chemdog with more Sativa than Indica properties.

Sour Diesel and OG Kush are two classic cannabis strains that, despite their different genetic backgrounds can be used for a variety of similar medical conditions.

The high they both produce is characterized by a short, intense peak that gives rise to more profound relaxation, though in the case of Sour Diesel, the crash can be much more pronounced.

Growers will find OG Kush easier to handle than Sour Diesel, it doesn’t grow as tall and is more resistant to pests and mold.

Both strains are a pleasure to grow, but for inexperienced growers, I would recommend OG Kush.