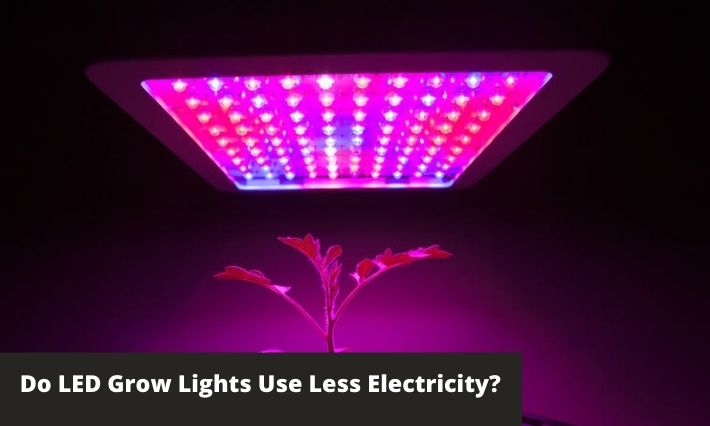 Whether you’re an individual or commercial grower, the size of your electricity bill is an important consideration.

This article will answer that question.

Short answer: Compared to HID grow lights, the short answer is YES, they do. However, the long answer is a little more complicated than that. Read on to find out why LED grow lights use less electricity than HID’s.

LED vs HID vs Fluorescent

The main comparison to be made here is really between LEDs and High-Intensity Discharge (HID) lighting. Fluorescent lighting uses much less electricity than both LED and HID grow lights. However, this comes at the expense of yield and quality, so we won’t include them in this comparison.

How to measure a grow lights efficiency

The most obvious way to measure the efficiency of a lighting system is by simply calculating the quantity of visible light produced (lumens) against the power (in watts) entering the actual light-producing part of the system (bulbs or diodes).

However, there are other factors that affect the cost of electricity to growers:

HID lighting systems require ballasts that convert electricity from a typical source (straight from the socket) into a usable form for HID bulbs. Depending on the quality and age of ballasts, the loss of efficiency can be small or large, but it is never insignificant. LED lighting systems can be plugged directly into the socket and won’t suffer the same losses.

Most of the light output from LEDs is focussed in one direction, meaning that an LED grow light doesn’t require extra components to focus its light on your plans. HID bulbs require hoods and reflectors to direct the light at your plants, which can reduce efficiency due to ‘trapped light’.

Most HID grow light systems require extra cooling and ventilation to remove the excess heat produced by the bulbs from the growing space. Ventilation means additional electricity costs from running fans. LEDs won’t need cooling as most models have built in fans.

LED grow lights definitely have an advantage over HID grow lights when it comes to electricity consumption. The running costs and durability of LED systems mean savings in other areas too, not just your electricity bill. Your heating bills will also go down and you won’t have to worry about replacing so may bulbs, either.

Can you grow weed with a blacklight?
Do LED grow lights need a ballast?