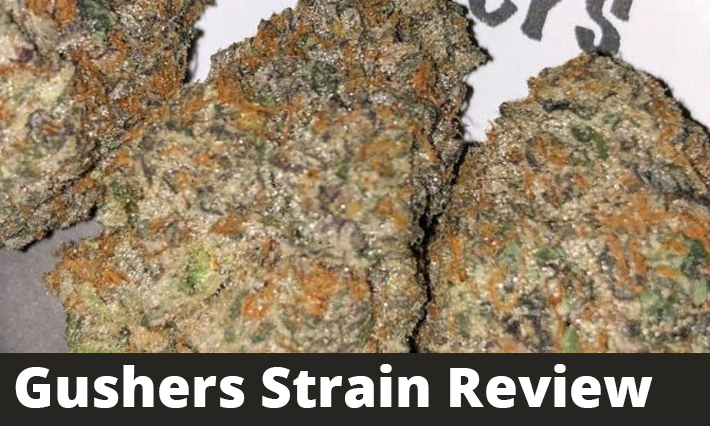 Named after the gummy fruit snack, the Gushers strain, also known as Fruit Gushers, is quickly becoming a favorite of cannabis connoisseurs.

This is thanks to its delicious taste and California-bred Cookies lineage.

In this article, we discuss where the Gushers strain originates, its characteristics, and give some details on how to grow this increasingly in-demand strain.

Gushers Strain (At a glance)

Where To Buy Gushers Seeds

Below, we answer some of the most common questions about the history of the Gushers strain.

What Is Gushers Strain?

Also known as White Gushers or Fruit Gushers, Gushers strain is a type of cannabis that has an impressive lineage of the Cookies variety that comes from California.

It gets its name from the gummy fruit snacks we enjoyed as kids because this strain tastes just as delicious.

What Does Gushers Mean?

The word Gushers most often means one of two things. First, it is a brand of fruit gummy snacks that were hugely popular in the 1990s and early 2000s.

The snack was discontinued in 2018.

Second, Gushers is a tasty, Indica-dominant, berry-flavored strain of cannabis with a Cookies lineage.

When Was Gushers Strain Created?

Around 2015, the breeders at California Cookies Fam Genetics created the Gushers Strain.

To do this, two well-known Indica strains Triangle Kush and Gelato #41 were crossed.

The resulting hybrid is a Gushers strain that has a sweet, fruity scent and almost a candy-like flavor accompanied by a satisfying high.

Where Does Gushers Strain Come From?

The Gushers strain was bred by cultivation experts at California Cookies Fam Genetics.

Gushers Strain gets its origins from the well-known Cookies lineage, popularized by the ubiquitous Girl Scout Cookie strain that every cannabis consumer knows about.

What Strain Is Gushers?

Gushers is an Indica-dominant hybrid with a 60/40 cross.

The buds from the Gushers strain are bright green with attractive-looking amber-colored red hairs and a tinge of purple.

The purple coloration is thanks to Gusher’s Gelato origins.

Let’s take a look at some of the most common questions about Gushers Strain’s characteristics.

How much THC is in Gushers Strain?

The THC content in the Gushers strain can vary widely, depending on where you purchase it.

Be sure to pay attention to the label on the flower you buy, so you get the experience you’re looking for from the Gushers strain.

How much CBD is in Gushers Strain?

There is a very low CBD content in the Gushers strain, almost always less than 1%, most often 0%.

You will be very hard-pressed to find any Gushers strain product with more than that. This is the case with buds, concentrates, and edibles.

What Are The Effects Of Gushers Strain?

The Gushers Strain is a nice balance of Indica and Sativa, with a slight Indica-dominance.

The Sativa side gives an enjoyable, giddy, cerebral head high, that can be used in the daytime for focus and conversation.

Its Indica side can help you relax at the end of a long day.

What Terpenes Are In Gushers Strain?

Due to its mainly fruity, sweet flavor the most dominant terpene in the Gushers strain is limonene.

There is also a decent amount of the terpene Beta-Caryophyllene found in Gushers, which lends itself to pleasing aromas like Rosemary and hints of spicy herbs.

The potency of the Gushers Strain varies, depending on what dispensary you buy the product from, and from which growers they source their material.

With this in mind, some Gushers flower can contain higher-end THC content of upwards of 25%, meaning it can be a pretty strong strain – especially for inexperienced consumers.

The noticeably delicious flavor and attractive aroma of the Gusher strain make it a top-shelf product.

Coupling this with the fact that users report feeling euphoric and cerebral head high with a relaxing body high makes Gushers strain a favorite for many cannabis connoisseurs.

Is Gushers Strain Indica Or Sativa?

Gushers strain is an Indica-dominant hybrid. It gets its quality lineage from the popular Indica strains Gelato and Kush, as well as being from the well-known Cookies varieties.

However,there is a noticeable amount of Sativa in the Gushers strain, making it one of the best balanced newer strains on the market today.

Because the Gushers Strain is fairly new to the world of legal cannabis, it can be considered exotic.

However, Gushers strain flower, concentrates, and edibles are usually available in the majority of high-end dispensaries, especially those on the West Coast U.S.

Below, we answer some of the most common questions about growing Gushers Strain.

Is Gushers Strain Hard To Grow?

Because Gushers is pretty new to the legal cannabis scene, there isn’t an abundance of information on its difficulty of growing.

Most growers report that Gushers is a straightforward Indica plant to grow – with shorter plants, thicker leaves, and a bushy appearance.

As long as Gusher plants receive adequate light, growing them shouldn’t be hard at all.

Is Gushers Strain An Autoflower?

Autoflower Gushers Strain seeds are available, but it’s unclear whether they are effective and flowering on their own or not.

This is mostly because the Gushers strain is pretty new, and that quality autoflower seeds are still being developed as the strain is strengthened.

How Tall Does Gushers Strain Get?

The Indica-dominant in the Gushers strain means that it is shorter than that of its Sativa counterparts.

Most growers report that their indoor Gusher plants reach up to three or four feet tall.

Outdoor Gushers plants can get noticeably taller, though – often reaching up to six feet.

Can You Grow Gushers Strain Outside?

Because the Gushers strain is hearty and bushy, it can be grown outside in the Northern Hemisphere.

As with all cannabis plants, however, it should be avoided growing Gushers if there’s a risk of frost.

How Long Does Gushers Strain Take To Germinate?

As long as you get quality seeds from a reputable source, your Gushers seeds shouldn’t take longer than five days to germinate and sprout.

As long as you keep the young seedlings near plenty of quality sunlight, seeds can germinate in as little as two days.

How Long Does Gushers Strain Take To Flower?

The flowering cycle of the Gusher strains takes anywhere from 7-9 weeks.

Of course, this depends on whether you grow Gushers indoors or out, where you get your seeds, your grow medium, and your expertise with cannabis cultivation.

How Long Does It Take To Grow Gushers Strain?

Naturally, growing cannabis outdoors takes longer than doing so indoors, and the Gushers strain is of course no different.

When To Plant Gushers Strain

Depending on the climate where you live, Gushers strain should be planted in late July to the middle of August.

If you live in a colder climate, don’t wait any longer than August 15th to plant, and consider doing so as early as the beginning of July.

How To Harvest Gushers Strain

When grown outside in warm, sunny climates, harvest your Gushers strain plants in the middle of October.

Harvest your indoor Gusher strain plants in as little as 8 weeks, but no more than 11 weeks.

How Much Are Gushers Strain Seeds?

Because Gushers is a newer strain, its prices can vary.

As this strain becomes more common, seed prices will start to normalize – likely around $30.

Who Has The Best Gushers Strain Seeds?

Many growers tend to get their Gushers seeds from Strain SuperMarket, I Love Growing Marijuana, the Clone Conservatory, and Seeds Here Now.

Gushers is a newer strain that people are just getting used to growing.

As such, there will likely be improvements and more standardized higher THC contents, better seed prices, even tastier sweet fruit flavors, and increased yield as the strain stabilizes.

How Does Gushers Compare To Other Strains?

Gushers and Gelato are very similar strains due to their lineage, as Gelato is the parent strain.

In addition, Gushers is an indica-dominant hybrid, while Gelato is a perfect hybrid strain with a 50/50 split.

Gushers have a fruity flavor with a combination of sour tropical fruits and rich, creamy cookies in every toke.

Gelato has a similarly sweet, berry aroma and creamy aftertaste.

The Gusher’s aroma follows a different profile, although with a slightly herbal overtone and touches of spicy grape.

While it is easy to grow, it only yields about 2 – 3 Oz/plant and can reach up to 3 meters.

Gushers and Gorilla Glue are unique and different strains.

Gushers is an indica-dominant strain with a 60:40 ratio.

At the same time, Gorilla Glue is another strain that is a hybrid of Sour Diesel and is highly potent compared to other strains.

Gorilla Glue is a Sativa-dominant strain with a higher ratio (60:40).

Named for the delicious candy, Gushers brings on the flavors with a combination of rich, creamy cookies and sour tropical fruits, while Gorilla Glue has notes of chocolate and coffee in it.

The aroma of Gushers follows the same profile, although with a slightly herbal overtone and touches of spicy grape.